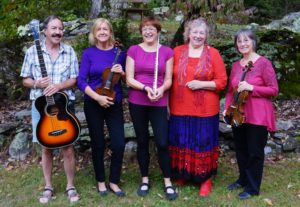 The Reel Thing is a western Connecticut-based band specializing in music for traditional social dances, costumed, authentic colonial dances and music from the 18th century, workshops for children and adults, and community “barn” dances. The group is made up of experienced, professional musicians who have a passion for folk music, dancing and performing.

Bill Campbell plays guitar and bass guitar for the band. In addition to his many years of experience, Bill teaches beginner guitar to adults and children. His musical career began in the ’60’s with formal instruction from the Rudi Lionetti Studio in Stamford. He played with bands in high school and college, and he has performed with groups at NOMAD. His other musical passions include the harmonica and bodhran (Irish drum), and he sang for a number of years with the Newtown Choral Society. Bill collects any instruments he sees and hangs them on the wall or makes them living room art. He actually plays some of them. His collection includes multiple harmonicas, violins, guitars, bodhran, stringed pennywhistle, nose flutes, tambourine and mountain dulcimer, along with his wife’s piano, uke, and tambourines. Along with his many other talents, Bill is the genius at making sense of all the sound equipment. 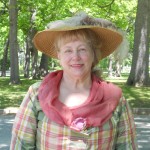 Fran Hendrickson has been a dance musician since 1977. She enjoys playing for Colonial Social Dancing, Traditional Squares and Family Dances on either piano or accordion, and has recorded with Connecticut groups Jackson Pike Skifflers and Spring Fever. With her husband Chip, she formed the Hendrickson Group, The Colonial Dancing Master, in 1988 to research and publish social dances and music from the second half of the 18th-century from primary sources. Fran recorded several albums of 18th-century dance music to accompany the choreography in Chip’s books. The Hendricksons taught and performed up and down the East Coast, for Loyalist Days in Saint John, N.B., and in France. Their specialty was the  Minuet, and Fran continues to give lessons in the Minuet.

Fran was the Coordinator of the Danbury Senior Center for 30 years where, among her duties, she organized a musical band called The Cellmates, (as the senior center was in the historic old Jail) playing continuously from 1984 – 2013. This was a lively group of senior citizens ages 60 into their 90s who played old time music, danced, and sang, bringing joy to all ages.  Fran conceived, organized and managed the NOMAD Festival which ran for 20 years, fulfilling a dream to bring an all-volunteer, participatory festival to life, to share with others and to carry on the various folk traditions to the next generation. Fran re-organized her business in 2012 as “Hendrickson Group LLC – The Colonial Dancing Master” to continue her late husband’s research and to perform and present programs on 18th-century civilian life. 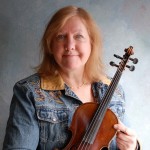 Sue Hill took up the fiddle in September of 1999 and discovered her love for traditional music. Nine months later she entered the New England Fiddle Contest and joined the Old Tyme Fiddlers Club. Growing up in Bristol, CT she played fife in Carey’s Cadets and later learned to strum the guitar. As an adult, she sang in a church choir where she learned to sight read and harmonize. She was influenced by her father who played the harmonica and trumpet and her aunt and grandparents who played the piano. Sue has studied and taken classes with Becky Tracy, Donna Hebert, Jane Rothfield, Jay Ungar, David Kaynor and George Wilson. In September 2006, she won first place in the Intermediate Division at the Blandford Fiddle Contest. Sue also runs a bi-monthly jam in Bristol and gives fiddle lessons. For the past five years, Sue has been holding square and contra dance classes for intellectually challenged adults. She is also a member of the Barn Band, Pot Luck, and Connecticut’s Bristol Old Tyme Fiddlers as well as a guest member for various other bands. 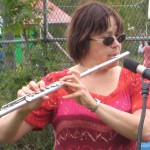 Julie Sorcek, who plays flute and saxophone for The Reel Thing, began playing flute at age 10. Aside from experience playing with high school and college symphonic bands, Julie has performed with the Danbury Community Orchestra, and at the NOMAD, Old Songs, and Philadelphia Folk Festivals. Julie has been a guest musician with the contra dance bands Jane’s Gang and Out on a Whim. She is a founding member of the contra dance band Wry Bred, sings and plays with the rock/pop band Rio and the UBC, and also performs with the folk group Chicks ‘n Sync. Julie can be seen on a regular basis performing with other area musicians at restaurants and coffeehouses in the greater Danbury, CT area. She retired recently as the concert band and guitar ensemble director at Immaculate High School in Danbury. Her repertoire on flute and sax includes contra dance, Celtic, Colonial, jazz, rock/pop, classical, old time, bluegrass, and folk music.


Ginny Worrell, the newest member to join the Reel Thing in 2014 plays keyboard and fiddle. A talented musician from New Britain, she grew up in a family dedicated to music. Her mother was a piano teacher and brother and sister both very accomplished musicians too. Her music studies started at the young age of 3 at the Hartt School of Music. Music has always been a huge part of her life as she participated in the Hartt Youth Orchestra, the CT All State Orchestra, and at 13 was the youngest member of the New Britain Symphony Orchestra. For many years, she was piano accompanist for the New Britain Musical Club, the Newington Choral Society, the Plainville Choral Society, Plainville Youth Theater, and a church organist for several local churches. Recently Ginny has been changing her style of music and has had great fun participating in fiddle contests and won 1st  place in the Roxbury CT Fiddle contest and 2nd and 3rd places in the Fiddle Festival at the Blandford MA Fair. Ginny performs Irish Music with “Stringing You Along” and is currently studying fiddle with Jeanne Freeman of the Connecticut Academy of Irish Music.

What People Are Saying…

Patricia has taught my children a wide variety of dance styles in numerous classes over the years. They love her because of her gentle and friendly style. She is knowledgeable and makes learning fun for the kids. We have also attended public venues where Patricia has been the dance caller. The evenings are always fun. Patricia brings authenticity to her dances calls. She loves dancing, loves to teach it and makes it easy to learn new dances do all can participate. I highly recommend Patricia.

Our homeschooling group hired Patricia and The Reel Thing for our fall family barn dance. When I ran into Patricia at a networking event years later (having not seen her since the barn dance in 2003), I instantly recalled her by her warm and personable character. During the dance, she was able to capture the attention of a diverse range of age groups (3-years-old through adult), and engage us all in learning and executing the dance steps. Laughter was heard throughout the evening as all who participated enjoyed the educational aspects of what Patricia does, and the entertainment provided by the freedom dancing brings. If you are seeking a knowledgeable and engaging professional to teach your group about traditional dance forms or to lead your next dance event, there is no one better that you could find than Patricia Campbell and The Reel Thing.

It is easy to see Patricia’s passion for traditional music and dance. She creates a fun and lively atmosphere and her experience as a teacher/caller makes it easy to learn the dances. We have shared and learned dances together at two dance leader’s workshops. While in town, I joined one of her dance sessions with the Bethel Senior group and we all had a lot of fun. Patricia is very versatile, being able to work with all ages from school children to older adults. I am impressed with her wide repertoire of music and dance.

Patricia is always well prepared to lead her dance sessions with a variety of dance traditions. She is gentle and patient with new dancers, while at the same time being interesting to more experienced dancers. Her extensive background, and her commitment to grow and improve as a leader, result in wonderful dances, such as the Barn Dance she recently led for us at Country Dance Stafford (CT). She works often with her seasoned band, The Reel Thing, You will not be disappointed.

It was a wonderful evening!  So much great energy in that room.  Thank you for managing our overflow crowd so nicely, and thanks, of course to the musicians. Thanks again for everything.

Patricia’s energetic, clear, and authoritative dance instruction made our event come alive! Our guests were a bit tentative about participating in 100-year old dances at first, but shyness quickly fell away as Patricia took the mike.  We all joined hands and had a great time with the lively and fun dances of the Victorian period. What a fun evening!

I offer my heartfelt thanks to The Reel Thing for offering a unique historical music entertainment, which offers one a rare glimpse of social grace during the 17th & 18th century.  Your unique reenactment, period dress, dance and music enhance and add zest to history by making history come alive.  You make history fun!

Find Me on Social Media

This site uses cookies, which may track information about your visit. By continuing, you consent to my use of cookies. OK Reject Read More
Cookie Consent

This website uses cookies to improve your experience while you navigate through the website. Out of these, the cookies that are categorized as necessary are stored on your browser as they are essential for the working of basic functionalities of the website. We also use third-party cookies that help us analyze and understand how you use this website. These cookies will be stored in your browser only with your consent. You also have the option to opt-out of these cookies. But opting out of some of these cookies may affect your browsing experience.
Necessary Always Enabled
Necessary cookies are absolutely essential for the website to function properly. This category only includes cookies that ensures basic functionalities and security features of the website. These cookies do not store any personal information.
Non-necessary
Any cookies that may not be particularly necessary for the website to function and is used specifically to collect user personal data via analytics, ads, other embedded contents are termed as non-necessary cookies. It is mandatory to procure user consent prior to running these cookies on your website.
SAVE & ACCEPT